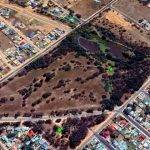 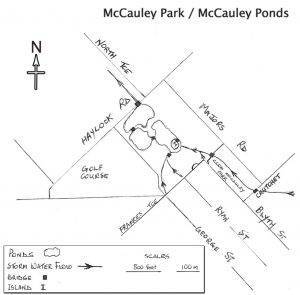 One of the features of Moonta is the parklands that surround the original township.  This far-sighted  design was created by the Surveyor General, GW Goyder when the town was surveyed in 1863. Thanks to his foresight, and the work of generations of community minded folk we have a pleasant border of parklands, community outdoor sporting facilities and the school grounds.

Over the years different individuals and groups developed particular sections of the parklands, and the last area to be worked on was what is now known as McCauley Park.  The main water catchment from the mines and town drained through this north-west portion and on to the sea, which may explain why it was left until last.

It seems the major development of the park was in the 1980s as a bicentennial project masterminded by W. Horace McCauley. Wetlands comprising a series of ponds were defined, walkways made and bridges constructed. The small island in the middle of the ponds was retained as part of the interconnecting waterways. The work was undertaken by McCauley, other community members and Moonta Apexians.

Countless seedlings, including local species, were planted throughout the area.  Horace McCauley was following the lead of his uncle, Clem McCauley, who had planted thousands of trees in the north parkland along Blyth Terrace.  The brilliant wattles that we enjoy each spring were the work of the two McCauleys and like-minded citizens.

Thirty years later the elements of the bicentennial project are still there so the work must have been well thought out and well-constructed.  Copper Coast Council is responsible for the maintenance of the park and keeps the pathways clear and open areas mowed. Community members stroll in the park, and play ball games in the open areas.  However, sections of the park have become overgrown, particularly the ponds. These are now filled with bulrushes and other weeds which clog the waterway.  No longer can the beautiful reflections of trees and sky be seen.

The ponds need a major clean-up and the bulrushes and weeds completely removed probably in late summer, when they are likely to be dried out. The Parklands could also be further developed. For example, comfortable picnic areas could be installed and conservation projects and wetland studies be undertaken. It could become another tourist asset for the town.  It just takes imagination, planning and effort.

You may like to visit the park and have a look for yourself. You could let your councillors know what you think about how the park and how it could be improved.  The good work of the McCauleys and other community members from previous generations could well be continued.

Ed Note: There appear to be few records of the history of the north west parklands / McCauley Park. If you could assist with stories, maps, photos etc please email info@moontaprogress.org.au

If you have any news or information that you think would be of interest to the community, please Contact Us.

For more news and local information, check out the latest version of the Community Newsletter. 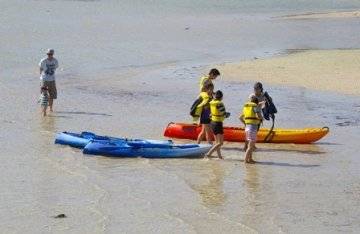