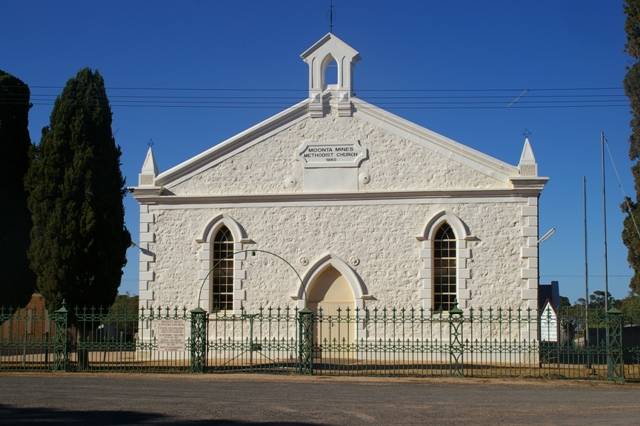 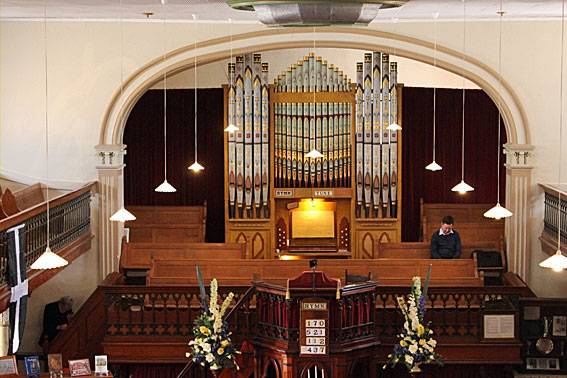 Moonta Mines Wesley Methodist Church (1865) is well worth a visit. Capt Hancock always kept an eye on those who attended Church, and more importantly, who didn’t.  Those without a very good excuse would soon be bought to task and reminded of the importance of worship to their wellbeing and their future at the Mines. Fellowship is a little more relaxed these days.

Built during the mining boom in this area in 1865, it seated 750 people. However, the number of worshippers greatly exceeded this number so in 1872, a gallery to hold a further 500 was installed, making the seating capacity 1250. Two Services were held each Sunday with a full congregation. On a lighter note, some things never change as repeatedly in the old Church Minute Books, the following is recorded “Some senior members of the Church Trust must go into the gallery and control the boys”.

In 1888 a large, beautiful Pipe Organ was installed at a cost of 258 pounds ($516). As you can imagine, after more than 100 years, the Organ required a major overhaul. Approximately three years ago, we obtained a quote of $45,000 for the refurbishment. It was a shock but we contacted the National Estate in Canberra and received a grant of $39,000. We went ahead with the overhaul, which was carried out magnificently by Mr Leith Jacob and his staff. On completion, he stated that the Pipe Organ is now possibly better than when it was first installed. We did not want the outside of the Organ touched and the paint work is original. Another reason for this was that the boys who pumped the bellows sat behind a large curtain and their names were scratched or pencilled on the panelling and we did not want this removed. These boys received one shilling (10 cents) a week for these duties. Quite often, to the consternation of the Organist, the boys would fall asleep during the sermon. The pump handle is still there and was used until 1960 when a motor was installed.

The Church is open for Visitors from 1.30 p.m. to 4.00 p.m. each day from September to April, and on Wednesdays and Weekends from May to August. It will only cost you a gold coin donation to visit this beautiful old Church. The proceeds are used to maintain the buildings and other incidental expenditure.

The Church has a service each Sunday at 11.00am